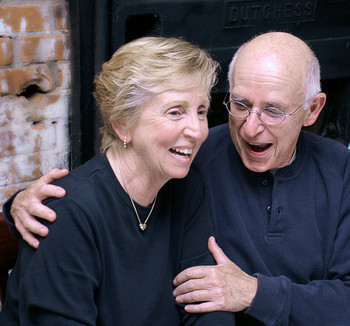 Living in the Upper Ojai, Fred and Ila devote their volunteer efforts to Help of Ojai, the Ojai Valley Library Friends and Foundation, the Music Festival and Ojai Community Hospital.

Fred started into serious photography as a teenager. He has participated in many Ojai Art Center exhibits and regularly displays his photos at the Ojai Library Bookstore. His 2009 photo show at Ojai City Hall featured views of Lake Casitas. Several of his photos are on permanent display at the Ojai Community Hospital. In 2007 Fred and Ila produced Faces of Help of Ojai, a book of photographs and words that highlight the efforts of senior volunteers.

During 2010 and 2011, they chronicled the rebuilding of Libbey Bowl. It was a natural extension of the work they have done photographing the Bravo music program and other Ojai Music Festival events. Watching and recording the Bowl reconstruction was also a welcome diversion while their son, Steven, an aspiring composer and musician, suffered an incurable illness. In Steven's memory, the Rothenbergs support the Ojai Music Festival Internship program
Fred Rothenberg
Powered by ZENFOLIO User Agreement
Cancel
Continue